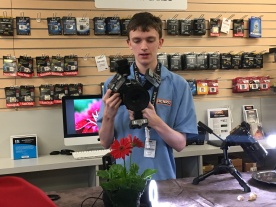 The general consensus was that the workshop was very worthwhile. It was well organized and informative. It really did open up a whole new aspect of photography .

The five workshop stations were well run. The presenters were knowledgeable and rehearsed.

The turnout was very good with about 40 people in attendance. .

It was nice that store was closed to regular customers  during that time .

Free high quality prints were a  nice bonus (apparently much better than Costco).

For those without much background in macro, several workstations explained true macro vs just doing close up photography with actual workstation macro set ups . Also there was a super macro lens demonstrated  using a high end Canon lens capable of  microscopic level resolution.

Capturing old  slides with a camera slide extension tube and tethering directly to a laptop and Lightroom was very clever.  It was shown that you could do a direct transfer to laptop of 4 slides per minute.

Henry’s (Jim) offered  to produce a blog for our web site explaining the set up.

Also the digitizing of  negatives was demonstrated using a smart phone for backlighting.

A large variety of cameras, lenses, tripods, lighting systems, subject mounting sliders were demonstrated and made available for us to try out. Much of it was very reasonably priced.

Some felt a bit more technical stuff would have been useful; perhaps  how to reverse our lens and use it as a macro lens, or even focus stacking etc.

Attendees did pick up quite a few tips. This event certainly provided  motivation to learn more about macro photography in the near future.

Henry’s advised they wont be repeating this workshop but will hold one on another subject in mid August (perhaps shoot out)  .

Many thanks to Alex and the Henry’s team for offering this workshop. It was a big undertaking and the Kanata Seniors Centre Camera Club wish to express our thanks . We really appreciated all your efforts. Well Done.

Feb 23: Get to Know Your Camera Workshop